Reflections and results from the 2019 Annual Competition 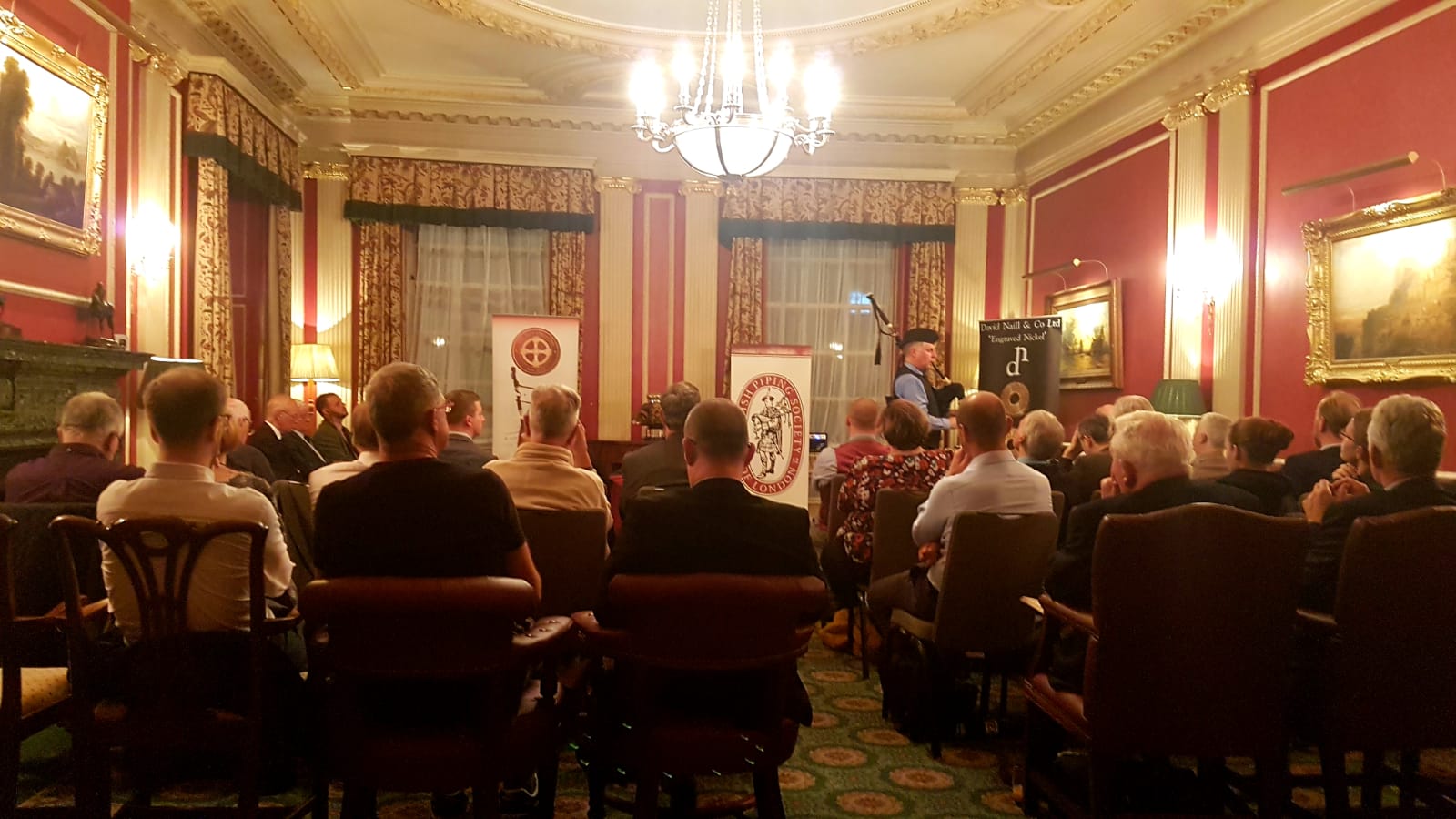 Context for the move to a new venue

The current SPSL committee has welcomed dialogue with competitors, the Competing Pipers’ Association and the Solo Piping Judges’ Association as part of its ambition to develop the annual competition. Since outgrowing the facilities at the Glaziers Hall, the SPSL moved to Kensington Town Hall. Whilst this has served as a great home for the event in recent years, the strength of feeling in the Committee was that this venue was no longer serving the needs of the annual competition. In 2018 the SPSL took the decision not to host the C Grade events nor the CLASP Amateur events. Various factors informed this decision; key for the SPSL is the long-term financial sustainability of the competition, ensuring appropriate competitor experience and encouraging a social atmosphere for competitors, SPSL members and broader spectators to celebrate highland bagpiping.

The next step in evolving the competition was to identify a new venue. The Committee implemented an 18-month plan to support the move from Kensington Town Hall, involving an extensive scouting of alternative venues. Whilst many venues were considered, the Society decided that The Caledonian Club in Belgravia had the appropriate balance of practical features, ambiance and connection to our piping heritage. The SPSL has an ongoing relationship with The Caledonian Club, as the venue for the SPSL Member Competition: an appropriate foundation on which to build the Annual Competition.

80th Annual Competition of the Scottish Piping Society of London

Consistent with 2018, the 2019 Annual Competition consisted of Premier, A, B and Junior events – competitor and adjudicator feedback informing this decision. However, a significant change saw the move to the venue, The Caledonian Club, and the prestigious Bratach Gorm event moved to Friday evening for the first time. The Competition received a healthy 69 entries with competitors travelling from North America, Canada, continental Europe and of course the UK and Northern Ireland.

Proceedings kicked off at 6pm in the Morrison Room of The Caledonian Club with Walter MacGregor, whom many in the South East piping community and beyond know well, as the Fear an Tighe. The panel consisted of Andrew Wright Bill, Wotherspoon, and Chris Armstrong.

On the door, 46 people paid to spectate the event. Competitors not competing in the Bratach were welcome to attend free of charge, and at least 11 competitors of other grades spectated at points during the evening. The SPSL is delighted at the response to the Friday evening Bratach Gorm. Part of the decision to move this event was so as to allow more of the piping community to be able to enjoy spectating the Bratach, free from the conflict of competing or spectating other simultaneous events – it was great that the competition drew such an audience. Whilst this did result in a packed and therefore very warm room, the audience was treated to an excellent competition and competitors said they enjoyed the atmosphere, acoustics and playing to a larger audience than the event has attracted in recent years. The Bratach Gorm was finished before 10pm and the decision was taken to hold back the result, in keeping with the tradition of not releasing this result until the end of the Annual Competition. A handful of attendees purchased a one-day ticket, so this decision may have left some people disappointed. The SPSL Committee will take this forward for discussion.

All piping convenors know the challenges of scheduling a busy day of events and London is no different. However, in response to competitor and steward feedback, the SPSL was keen to avoid very early start times, particularly with a Friday evening event before the full day on Saturday. In moving to The Caledonian Club, and making use of bedrooms as tuning rooms, the Annual Competition had a more leisurely start with Junior events starting from 09.30am and other events starting from 10am. There was a disappointing entry for this year’s Junior events but the SPSL is committed to supporting youth piping and held three events with a small prizegiving at lunchtime.

The Caledonian Club is a more intimate venue than Kensington Town Hall and as competitors arrived over the course of the day the atmosphere built. There were the perennial issues of temperature difference between tuning rooms and performance rooms, as well as some of the tuning rooms being small, which the Committee can look to address in future competitions as much as possible. Due to the later start time, and some big piobaireachds in the Rams Horn Snuff Mull (A Piobaireachd), the B Hornpipe and Jig had a later than anticipated start as the final event of the day. The organisers took the decision to move this to the Morrison Room nearest the bar, which allowed people to move between these rooms easily and for a very quick transition from the Competition finishing into the Main Prizegiving.

The Committee has received over 35 pieces of written feedback – and much more verbal feedback from competitors, adjudicators and spectators who took time over the weekend to share their perspectives on the Competition. Acknowledging teething issues, and specific isolated problems which anyone organising a piping event of similar size and scale encounters, the feedback received directly to the Society has been overwhelmingly and unequivocally positive. Over the coming weeks the SPSL Committee will reflect on competition feedback as we look ahead to plans for next year. We invite spectators, adjudicators and competitors, who want to provide feedback, to contact us: info@scottishpipingsocietyoflondon.co.uk

Importantly, the SPSL thanks our key sponsor, the William Grant Foundation for their continued support of the event. Furthermore, to David Naill & Co. and Martin Cowell in particular for the continued sponsorship through the donation of raffle prizes, most significantly a set of bagpipes. The Highland Society of London is another significant sponsor of the SPSL, and this year The Piobaireachd Society specifically sponsored the Bratach Gorm. Additional sponsors supporting the SPSL include The London Highland Club, The Hall Family, London Scottish Regiment and The Caution Family. The fruitful relationship with the City of London Pipe Band continues and we are delighted that many of our stewarding team were from the band.

The SPSL Committee congratulates Callum Beaumont on an exceptional day at this year’s Competition. In winning the Bratach Gorm, William Gillies Memorial, JB Robertson Rose Bowl, London Medallion and John MacFadyen Quaich, Callum almost had a clean sweep of the P Grade events therefore making the compiling job particularly easy in calculating the Overall Champion Piper. Callum has therefore secured his invitation to the Glenfiddich 2020 (31 October 2020) in the first qualifying competition of the year. Whilst the Committee congratulates all other prize winners, particular note must be made of Alasdair Henderson, who came second in all of the P Grade events with the exception of the P Hornpipe and Jig, and for whom on a typical year such consistently strong placings may have secured him the position of Overall Champion Piper.

Finally, we would like to thank competitors and adjudicators for their continued support of the competition, and to spectators for your support. We had a footfall of 71 spectators on Saturday, which is impressive for an event of this size and contributed to the packed atmosphere in the bar and a vibrant social buzz towards the end of the day. Many thanks to all and we hope to see you at the 81st Annual Competition in 2020.

The full competition results can be found below.

Overall Champion Piper of the 80th Annual Competition of the SPSL:

The Scottish Piping Society of London is pleased to announce the winner of this year’s Piobaireachd Society sponsored Am Bratach Gorm:

Callum Beaumont (Lament for the Earl of Antrim)

The other Am Bratach Gorm prize winners were:

Overall winner of the A Grade competitions, winning the Terry Maginn Trophy

The Strachan Memorial (for the AMSR competition)

Donald Forbes Medal (for the A Hornpipe and Jig competition)

Overall winner of the B Grade competitions, winning the Angus Nicol Award

John Roe Plate (for the B Piobaireachd competition)

Hugh MacMillan Trophy (for the B Hornpipe and Jig Competition)